The 2018 Jeep model year started a whole new breed of Jeep Wranglers and added more variations than ever before. From multiple engines to a Wrangler “Truck” (Gladiator JT) there has never been more questions about Jeeps. The answers on this page are just quick responses, but some have links to more in-depth information.

Do I need to re-gear my JL/JLU/JT?

The short answer is no. You don’t “need” to, but if you want the best performance, you might want to.

It is generally recommended to find the gear ratio that gets you close to stock RPM’s at 70mph and go up 1 or 2 ratios to make up for the added weight of tires and other accessories. If you have a diesel or Hemi, you can stick with just one ratio up.

Keep in mind, there is only a 5% difference between 4.88’s and 5.13’s, which is little more than the differences between tire brands of a rated diameter. In addition, as tires wear, they get smaller. A well worn 37 inch tire can measure closer to 35 inches, which is a 5% difference!

In 1945, the very first “Jeep” branded vehicle was produced. It was the CJ-2A, CJ stood for “Civilian Jeep.”

In 1976, the CJ-7 was introduced with a longer wheelbase than the popular CJ-5 and became the starting point for the first Wrangler. It was produced until 1986.

Two letter body codes continued to be used to differentiate different types of Jeep vehicles. For example, the original 1963-1983 Grand Wagoneer is considered an SJ and 1984-2001 Cherokees are XJ’s.

The two character body codes only get changed when there is a complete redesign of the vehicle.

In 1987, Chrysler introduced the first “Wrangler” as a more consumer friendly, soft top Jeep vehicle. It was the biggest change in the history of the iconic Jeep. It’s body code was “YJ”, which some claim stands for “Yuppie Jeep”, because it had a lot of creature comforts which CJ enthusiast frowned upon.

For the 1997 model year, Jeep introduced the Wrangler TJ. It was the first Wrangler to have coil springs instead of leaf springs. As with the introduction of the YJ, Jeep “purists” frowned upon it becoming more and more like a “car.” In 2004, Jeep produced a longer Wrangler called the Unlimited. Most people refer to a TJ Unlimited as an “LJ” although it was never the official body code, but that is a whole different story.

For the 2007 model year, Jeep introduced the Wrangler JK. However, they also introduced the 2007 unlimited as a 4 door model. The 4 door Wrangler JK Unlimited’s are referred to as JKU’s. Keep in mind, they are still considered a JK body style.

2018 was a strange year for the Wrangler as both JK’s and JL’s were produced. Since the CJ-7, Jeep was changing body codes every 10 years and they were way overdue.

Here are a few ways to tell from the front…

At a glance, they are very similar, especially with aftermarket bumpers and/or flares. The one thing that stands out on a JL is the “vent” on the body behind the front fenders, it looks almost like a gill. 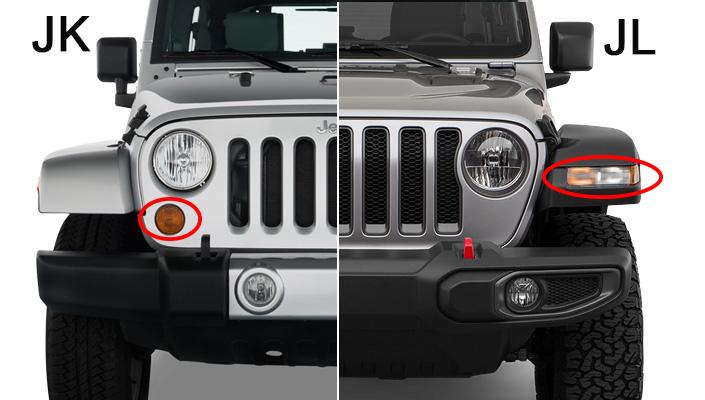 Is the Wrangler 392 Worth the Money?

If you are even considering a HEMI or other engine swap, you should check out the 392. It really is a bargain!

Hemi powered Wranglers are not a new thing, the aftermarket has been doing them for well over a decade. To have a 6.4L Hemi put in your Wrangler JL will run you about $35,000. For less than $14,000, you can upgrade to one with a factory warranty and a bunch of other cool stuff.

Read More About the Rubicon 392
Is a Rubicon worth the extra money?

The main upgrades/features of a Wrangler JL Rubicon…

Consider the benefits vs cost of a Rubicon if…

Is a Rubicon the Right Choice for Me?

Click Here or the Image Above for the Calculator